Thursday Movie Review- Retarded but in a Good Way

This week thanks to a freebie at Redbox I was able to finally see Casa de mi Padre.

The guys co-staring with Will are pretty tasty as well.

So, Will Ferrell plays Armando Alvarez who has lived and worked on his father’s ranch in Mexico his entire life.

He is just a simple rancher.  He is treated with little respect from his father, who though loves him, doesn’t see him as smart.

The father rationalizes that Armando can never run the ranch. All Armando is good for is tending to the cattle.

Oh and one more thing… the movie is all in Spanish. Like you Americanos, I have to read the English subtitles cause I don’t speak a word of Spanish.

Armando’s friends joke with him that he has never been with a woman. He acknowledges that this is true but because he has not found the right one.
The ranch encounters financial difficulties, and soon, Armando’s younger brother Raul shows up to ease his father’s woes. Raul also brings with him his new girlfriend Sonia.  It seems that Raul’s success as an international businessman means the ranch’s troubles are over as he pledges to settle all debts his father has incurred. 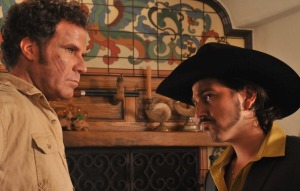 Armando is suspicious of the is beautiful woman and questions her and her love for his brother.  Through Sonia, he learns of her treacherous past and also the true dealings of his brother, Raul.  As expected,  Armando falls for Sonia, and Raul’s business dealings turn out to be less than legit. He is a drug dealer.

Soon Sonia becomes involved in a war with Raul and Mexico’s most feared drug lord, the mighty Onza. 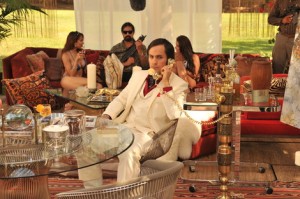 And Armando is the only one who can save her and his ranch.

This movie was sooooooo damn retarded. However, I liked it. It got ripped to shreds by the critics. Of course it wasn’t Oscar worthy. It was purely for entertainment.  The humor is pretty old-school which you rarely see these days. They don’t spoon-feed the audience a lot of obvious HAW and BAHAHAHA moments which is what makes this movie clever. Loved the way it was shot, especially the cut scenes where the director really had some fun. For those of you who enjoy comedy on many different levels, this one is a must.

Casa de mi Padre is a spoof of soap operas, the ones in Latin America in particular, and westerns. If you have seen these novellas or soap operas you will know that they over-react like a mother. Scenes are drawn out more than that have too and dramatic music is overplayed and overused.  However, it’s all in good fun.  The movie does ridiculous stuff such as obvious fake backgrounds, revealing the camera crew in reflections and obviously fake animals in the scenery.

“Casa de mi Padre” is a bizarre experiment but it works. The film is played VERY seriously while insanely stupid things happen all around him. It’s very surreal and very odd–and the sort of experiment many will find baffling and unfunny. However, you got to see it as it is. And what it is trying to do.

This film is based on clichés and is predictable. It is the way Ferrel portraits his character with HIS kind of humor. Mixed with typical buildups and “one-take” shots, seen in Mexican movies and Spanish series… The facial expressions and timing makes this film. It’s not a bad film but it is a mater of taste.

I can’t help it I am a sucker for retarded things.

Behind the Behind, Freakin Weird, Funny, Humor, Movies, Opinion, Reviews